Kenny Rogers made singer Billy Currington's lifelong dream come true on Wednesday (09May12) by inviting him onstage for a duet duringhis show in Nashville, Tennessee.

The veteran Lady hitmaker was performing the first of two nights at Nashville's Country Music Hall of Fame and Museum and he had a special guestin store for fans as he launched into a rendition of Standing on the Rock of Your Love.

Addressing the audience, Rogers said, "I have a surprise for you tonight; I've asked Billy Currington to come out and sing it with me".

Currington took to his Twitter.com blog on Thursday (10May12) to relivethe moment he joined his idol onstage, posting a photo of the pair alongside the caption, "i dreamed of singin  (with) kenny rogers for a lonnnngggg time. came true last nite (sic) thanks kenny !" 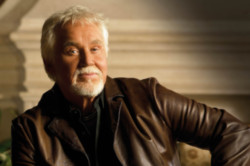