Coolio's eldest son has been handed a prison sentence of up to 10 years for his part in an armed robbery.

Grtis Ivey, 22, who appeared alongside his rapper dad on reality TV show Coolio's Rules, was accused of breaking into an apartment in Las Vegas last Octobe and threatening the resident with a gun.

He pleaded guilty to a charge of felony robbery earlier this year in exchange for a number of other charges being dropped, and now he has been handed a lengthy prison sentence.

Ivey was sentenced to between 42 and 120 months in jail, meaning he will serve a minimum of three years behind bars but could be incarcerated for up to a decade, according to TMZ.com. 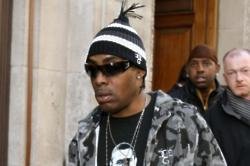