You can check behind my ears if you want

Scottish singer Lulu has given up Botox treatments after setting up her own beauty products company.

The Shout hitmaker is convinced her looks have improved over time and she decided to stop using the wrinkle-freezing injections.

Speaking on an upcoming episode of Piers Morgan's U.K. series Life Stories, she says, "You can check behind my ears if you want. I used to get Botox and fillers but not any more. "My skin care company, Time Bomb, is also the reason.

I spent so much time on skin care it eventually became a project.

"And also people think I look younger now because I used to look so much older when I was young! Whereas Brigitte Bardot and beauties like her peaked in their twenties, I certainly didn't - so I had room to improve mystyle over the years". 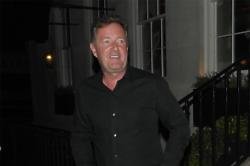