Robin Gibb has died at the age of 62.

The British singer lost his battle with colon and liver cancer and passed away on Sunday (20May12), according to his family.

A statement reads, The family of Robin Gibb, of the Bee Gees, announce with great sadness that Robin passed away today following his long battle with cancer and intestinal surgery.

The family have asked that their privacy is respected at this very difficult time.

Born in the Isle of Man, Gibb began his music career as a teen when he joined forces with his twin brother Maurice and older sibling Barry to form the Bee Gees.

The stars initially tasted fame in their adopted home of Australia, where the family had moved in 1958, but they were catapulted into the spotlight when they returned to their native Britain in the late 1960s.

Their harmonies helped them score early hits with To Love Somebody, Massachusetts and I Started A Joke, but Robin, a vibrato who shared lead vocals with Barry, quit the band to embark on a solo career in 1969 after a disagreement.

He enjoyed minor success in Europe with his track Saved by the Bell, but his album, Robin's Reign, struggled to make much of an impact on the charts and he decided to reunite with Barry and Maurice just a year later (70).

The trio's popularity began to wane and it wasn't until the mid-1970s that they returned to prominence with the disco hit Jive Talkin'.

Follow-up tracks like How Deep Is Your Love, Stayin' Alive and Night Fever - all from the bestselling Saturday Night Fever movie soundtrack - cemented the Bee Gees' place in history as one of the most successful acts of all time with total record sales in excess of 220 million.

The Grammy Award winners disbanded in 2003 upon the death of Maurice Gibb, and itwasn't until 2009 that Barry and Robin decided to reteam and occasionally perform as the Bee Gees.

Robin, who had resumed his solo work, suffered a career setback in August, 2010 when he was hospitalised with stomach pains after performing in Belgium.

He underwent emergency surgery for a blocked intestine - the same condition which killed his brother Maurice.

He bounced back from the medical emergency, but his health continued tocause him problems and he was forced to cancel a string of appearances in 2011.

In November, it was reported that Robin, who had been pictured looking frail and gaunt, had been diagnosed with liver cancer, and he confirmed the news in January (12), revealing that doctors had found a tumour in his colon 18 months earlier, before the disease spread to his liver.

He underwent intensive chemotherapy treatment and spent the first quarter of 2012 in and out of hospital due to various operations, but managed to muster enough energy to return to the stage in February to perform with military singers The Soldiers for London's Coming Home charity concert,in support of injured servicemen.

In early April (12), Robin announced his cancer was in remission, saying, "The results of my treatment have been spectacular - that's the doctors' verdict. They're completely stunned by my progress and it gets better all the time. The speed of the treatment and the results have ove rwhelmed everybody. All the doctors have said so".

But days after declaring he was winning his health battle, Gibb was back under doctors' care after falling ill with pneumonia and slipped into acoma.

His condition was considered so serious, his brother Barry flew to the U.K. from his home in Tennessee to join Robin's second wife Dwina, their son Robin-John and his two children from his first marriage for a bedsidevigil.

Brave Robin stunned medics by making a "miraculous recovery", and was set to undertake further chemotherapy sessions at the time of his death.

Robin was made a Commander of the Order of the British Empire (CBE) in Queen Elizabeth II's 2002 New Years Honours, an award he collected in 2004 following Maurice's passing.

The star's seventh solo album, Titanic Requiem, written with his son Robin-John and recorded by the Royal Philharmonic Orchestra, was scheduled for release in 2012 to mark the 100th anniversary of the ship's sinking. 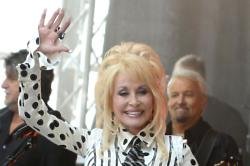 Dolly Parton: Reese Witherspoon's boobs are too small to play me