Sting Performs At Two Charity Gigs in One Night

The singer took to the stage for Tony Bennett's Exploring the Arts gala at Cipriani on 42nd Street to honor Allen Grubman, who has been his lawyer for more than 30 years.

Sting performed acoustic versions of hits including Fields of Gold and Every Breath You Take, before heading to an event hosted by his friend Paul Simon at Radio City Music Hall, according to the New York Post's gossip column Page Six.

Rita Wilson and her husband Tom Hanks also performed at the bash, a day after the actor admitted he was brushing up on his guitar skills for the gig. 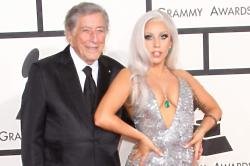