Writer and author Alice Walker has pleaded with Alicia Keys to cancel her upcoming Israel concert to protest the government's alleged mistreatment of Palestinians.

The Color Purple writer has urged Keys, who is due to perform in Tel Aviv on 4 July (13) as part of her Set The World On Fire Tour, to scrap the concert in response to the ongoing conflict between Israel and Palestine over the Gaza strip, which has prompted a number of top international acts to boycott the nation as a result of the growing violence.

In an open letter to Keys, she writes, "It would grieve me to know you are putting yourself in danger (soul danger) by performing in an apartheid country that is being boycotted by many global conscious artists.

"You were not born when we, your elders who love you, boycotted institutions in the US South to end an American apartheid less lethal than Israel's against the Palestinian people...

We changed our country fundamentally, and the various boycotts of Israeli institutions and products will do the same there.

It is our only nonviolent option and, as we learned from our own struggle in America, nonviolence is the only path to a peaceful future...

"Please, if you can manage it, go to visit the children in Gaza, and sing to them of our mutual love of all children, and of their right not to be harmed simply because they exist".

Stevie Wonder, Elvis Costello and The Pixies are among the stars who have cancelled gigs in Israel as part of the boycott. 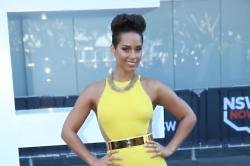