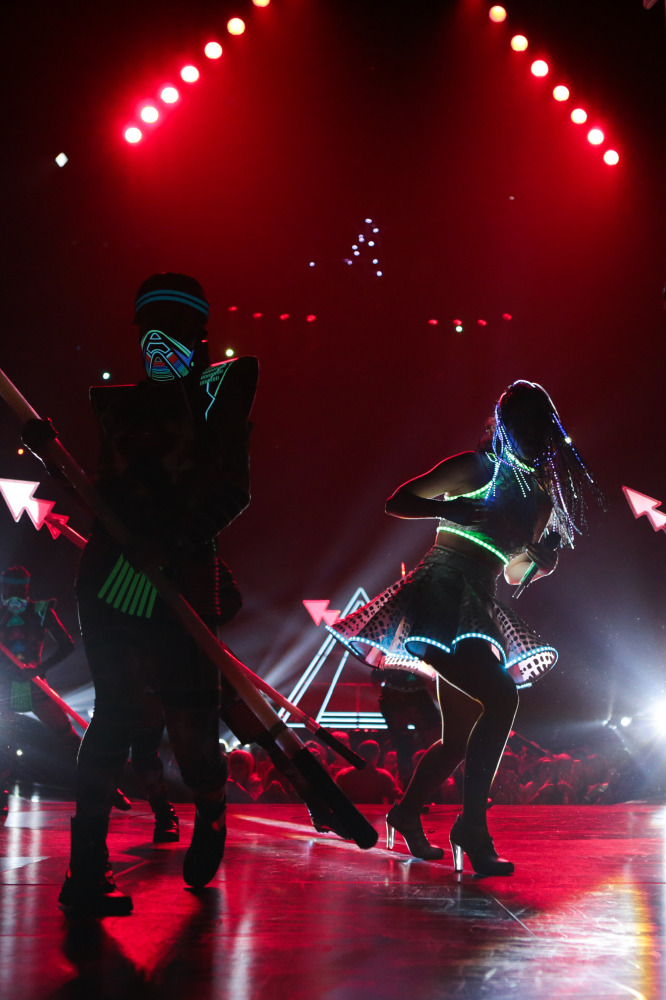 Beyonce, Miley Cyrus and Katy Perry ruled the 2014 MTV Video Music Awards at The Forum in Inglewood, California on Sunday (24Aug14), by picking up the biggest honours.

The Roar hitmaker took home the first Moonman trophy of the night for Best Female Video for Dark Horse and was joined onstage by rapper Juicy J who appeared on the track.

Cyrus, who returned to the prizegiving a year after causing a stir with her raunchy routine with Blurred Lines singer Robin Thicke, was all about the message this year, choosing to use her Video of the Year acceptance speech for Wrecking Ball to pay tribute to homeless youths.

The pop star sent a man named Jesse to accept the prize on her behalf for the "1.6 million runaways and homeless youths in the United States, who are starving, lost and scared for their lives right now".

He continued, "I know this because I am one of these people... If you want to make a powerful change in the world right now, please join us and go to Miley's Facebook.com page. A dream you dream alone is only a dream, but a dream you dream together is reality".

Beyonce was feted with the Michael Jackson Video Vanguard Award and wowed the crowd with a show-stopping performance featuring a medley of hits from her self-titled album, including Partition, Flawless and Drunk in Love.

After her stunning set, which brought the audience to its feet, she was presented with the accolade by daughter Blue Ivy and husband Jay Z, who called his wife "the greatest living entertainer".

Beyonce tearfully accepted her award, saying, "I'm so full. Thank you, I have nothing to say, but I'm filled with so much gratitude. I just thank God for this moment and I love y'all so much. Blue I love you, my beloved I love you, my fans I love you, MTV I love you, goodnight".

The moment appeared to be her bid to once and for all end divorce rumours.

Jessie J then started off the trio's new hit song Bang Bang, but Minaj suffered an embarrassing wardrobe malfunction when she did not complete her quick-change in time and was forced to hold the front of her dress together so as to not expose her bare breasts as she returned to the stage.

Other performance highlights included Sam Smith with his hit song Stay With Me and Maroon 5, who made their VMAs debut with a performance of Maps outside of the venue.

Iggy Azalea and Rita Ora also hit the The Forum stage for their first-ever live performance of Black Widow.

There was also a couple of serious moments in among the festivities - Robin Williams, who passed away earlier this month (Aug14), was remembered and rapper Common asked for a moment of silence for Missouri teenager, Michael Brown, who was killed by a police officer in Ferguson, Missouri on 9 August (14), sparking the ongoing unrest in the state.