The hip-hop star, who is believed to have suffered from sickle-cell anemia, passed away on Friday (06Jun14) after suffering a cardiac arrest in hospital a day after he was admitted, according to MTV.com.

No more details were available as WENN went to press.

Music mogul Jermaine Dupri is among those who have paid tribute to the young star, writing in a post on Twitter.com, "Cali Swag District rapper JayAre dies Damn!! I'm so sorry to hear this, RIP".

The death of JayAre, real name Cahron Child, comes three years after the band lost another member, M-Bone, who was killed in a drive-by shooting in California in 2011. 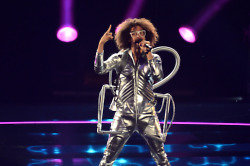