The man behind the supergroup rarely performs Nirvana tracks out of respect for his dead bandmate, but he thought the idea to bring Harvey up onstage would be a great one, considering how much Cobain liked her.

The former Nirvana drummer tells the NME, "Someone came up with the idea of doing a Nirvana song with PJ Harvey. Kurt loved her and we love her and we thought, 'Yeah, what would we do?' "I said, 'God, what if we were to do Milk It from In Utero with Polly singing?' We all looked at each other like, 'Woah, that would be amazing...' and then she couldn't do it!"

Grohl admits it would have been a rare one-off - because he really doesn't like to perform Cobain's songs "The thing is, it's sacred ground. If we were ever to do something like that it would have to be right because you want to pay tribute. There's a reason Foo Fighters don't do Nirvana songs, and it's a good reason".

Grohl recently announced he was disbanding the Sound City Players, which he formed with John Fogerty, Stevie Nicks, Rick Springfield, Corey Taylor, Krist Novoselic and his Foo Fighters bandmates to promote his documentary debut about the studio where they all recorded classic albums, after the combo's performance at the South by Southwest festival in Austin, Texas.

The group made its debut at the Sundance Film Festival in Utah in January and Grohl and his bandmates have since performed in New York, Los Angeles and London. 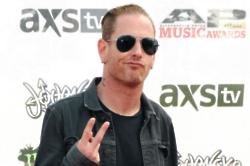