Pearl Jam rocker Eddie Vedder thrilled the crowd at a Neil Finn gig in Sydney, Australia on Wednesday January 29 by joining the Crowded House star on stage for a session.

Vedder, who has been touring Down Under, was in the audience for Finn's concert at the Seymour Centre with his wife and a group of friends.

He left his seat during the concert and joined Finn on stage, performing a version of Throw Your Arms Around Me by Australian rock group Hunters and Collectors.

The show was taped for an upcoming Australian TV broadcast in March (14). 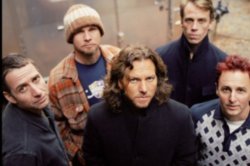 Pearl Jam Score US Number One