Former SPICE GIRLS star Geri Halliwell has been tipped as a frontrunner to represent the U.K. at this summer's (14) Eurovision Song Contest.

The singer has mainly focused on TV projects since the pop group disbanded, and a recent effort to revive her music career in Australia fell flat when her single flopped in the charts Down Under.

However, Halliwell has now been tipped for a 2014 comeback amid rumours she is being courted for a place in Eurovision.

A source tells Britain's The Sun newspaper, "Geri seems a perfect fit for Eurovision... It's now a case of whether she is up for it as the BBC is. If she wins, she would be hailed as a legend".

A spokesman for the BBC, which airs Eurovision in the U.K., refused to confirm whether Halliwell had been approached with the offer, adding, "As yet, a decision has not been made, but we will make an announcement in due course".

Previous big names to represent the U.K. at the popular singing competition include Bonnie Tyler, Engelbert Humperdinck and boyband Blue. 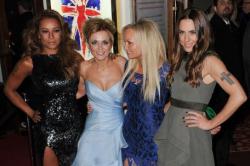