Julian Casablancas has revealed plans to record new material with The Strokes.

Following recent album 'Tryranny' with The Voidz, the singer's revealed he hopes to shift focus back to his original band, who haven't released anything since 2013.

Julian told Noisey: "It's the first time we've been exclusively writing since 'Comedown Machine'. We're planning on recording stuff. I still think we could do cool things and I'll do that. I'd like to do both [bands] really if I could."

Julian became friends with the band after they played alongside The Voidz at a number of South American festivals early in 2014.

Meanwhile, The Strokes recently announced they'll be headlining the 'British Summer Time Festival' in London's Hyde Park on June 18, which will be their first UK gig in five years.

However, the musician has distanced himself and both bands from the possibility of appearing at the iconic Glastonbury music festival this summer.

Julian wrote online: "For those kindly asking, nopes, no Glasto this year!" 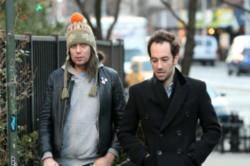