Katy Perry paid homage to Britney Spears at the MTV Video Music Awards on Sunday night (24Aug14) by recreating one of the pop star's iconic outfits from 2001. 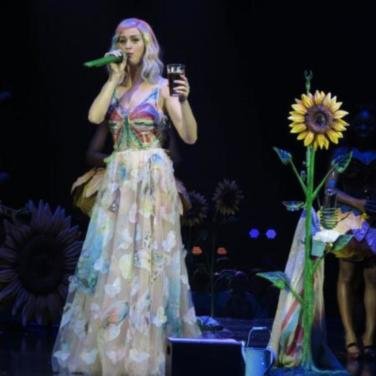 Katy arrived on the red carpet at the Los Angeles' Forum venue in an orange Lamborghini driven by rapper Riff Raff.

Perry stepped out of the sports car in a custom Versace strapless denim dress, which was accented with silver jewels and a high slit, while Riff Raff wore a matching denim suit and cowboy hat.

Perry called the look a "throwback to Britney and Justin (Timberlake)", referring to the former couple's unforgettable matching jean outfits it wore at the 2001 American Music Awards.

Perry wasn't the only one who made a statement on the red carpet - model Amber Rose accompanied her rapper husband Wiz Khalifa while wearing a barely there silver chain dress, complete with a bejewelled bra and sparkling G-string underwear, reminiscent of actress Rose McGowan's infamous 1998 VMA dress, which exposed her bare bottom.