Nick Jonas has re-teamed with his former tourmate Demi Lovato to work as musical and creative director on her upcoming shows.

The singer, who previously toured with Lovato during his time with the Jonas Brothers, landed a job overseeing work on her upcoming Neon Lights trek, which kicks off in Canada later this month (Feb14).

Jonas' role involves managing backstage preparations and designing the show, while he has also been looking after the musical arrangements.

He tells Rolling Stone, "I'm overseeing video content, wardrobe, lighting and staging. And then I'm extending into the musical side of things, which includes creating the arrangements for the songs. I'm building what Demi wanted, which is a show without stops and starts... Demi and I have the same manager. I was immediately excited when I was offered the position. The relationship that Demi and I had over eight years really gives me the insight into how to best communicate with her and her team... I won't be at every single show,. I'll get the tour up and running, make sure it's running smoothly, and then check in every few weeks". 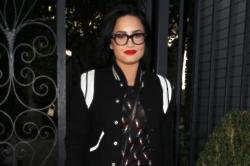