Sky Ferreira and Cat Power are set to headline an Elliott Smith tribute show in New York later this month (Oct13) to mark the 10th anniversary of the singersongwriter's suicide.

The Low Anthem, Speedy Ortiz star Sadie Dupuis, Yoni Wolf and former Chairlift member Aaron Pfenning will also be part of the line-up, while Ferreira's boyfriend, DIIV frontman Zachary Cole Smith, will team up with the Everthing Is Embarrassing hitmaker for a special collaboration.

The gig, held at Glasslands in Brooklyn on 21 October (13), will mark both Ferreira and Smith's first performances since they were arrested on drug charges in the Big Apple last month (Sep13). 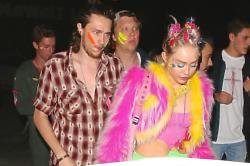