Scottish singer KT Tunstall has revealed singing her first record deal in 2002 was the ''most challenging decision'' of her life.

KT Tunstall believes signing a record deal was the "most challenging decision" she ever made.

But by the time I was 27, it was apparent I would have to change my strategy if I was going to make a living from music.

The Scottish folk rocker - who had pursued her interest in electronic music up until being signed as a singer/songwriter in 2002 - admitted while she was initially determined to remain an independent artist, she realised at the age of 27 she wasn't making any money.

She said: "I think signing my record deal in 2002 was probably the most challenging decision I ever made. I spent my 20s determined to remain an independent musician. I always had this awful feeling I would be signing over my creativity to people I couldn't trust.

"But by the time I was 27, it was apparent I would have to change my strategy if I was going to make a living from music."

The 'Suddenly I See' singer - whose husband Luke is the drummer in her band - also revealed touring together has taught the couple the art of "explosive fights".

She added to Stylist magazine: "I love the fact that we can pursue our own paths independently but can do it on the same stage. But living on a bus with 10 other people, as a couple, can be testing.

"It definitely teaches you a few things, like how to sort out your sh*t quickly, so we've learned to have fast, explosive fights! Before you know it, they're over and we can move on."

tagged in The Stylist KT Tunstall 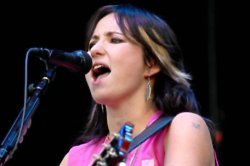