The UK’s biggest underground band Hadouken! recently revealed that their 3rd album will be called Every Weekend.

We are pleased to now announce that it will be released both physically and as a download on February 18th, 2013 via their own Surface Noise Recordings imprint.

Hadouken! are also excited to announce a headline tour in April. The date follow below. 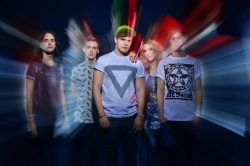