Fabolous has brushed off his escalating war-of-words with Jim Jones on Twitter.com - insisting his rap rival was joking when he told the Trade It All hitmaker to "play dead".

Jones first took aim at his rap rival following the debut of Fabolous' Body Ya music video, accusing him of being unoriginal.

He wrote: "I just seen another rapper's video that look just like my chain gang n scarf. Damn, I'm sonnin (something) these n**gaz. I guess my style might body ya. Lol."

Fabolous responded by bashing Jones' mixtape, The Ghost of Rich Porter. He wrote: "iJustWannaKnoWhy the competition won't stay Dead. Maybe I should (release) a new mixtape call (sic) TiNc3 - Ghost of the Competition."

But Fabolous insists the online fight won't escalate. He tells MTV News, "I don't know where his comment came from. I joked around with it too. It was kinda subliminal.

"I think it's definitely competition. But you can say things - it gets taken out of context whether you meant it as a joke or not. It could have been his opinion, but it still was thrown the way he threw it. It could have been taken in the context of you taking a shot at somebody. But I had fun with it, I made some jokes. That's it. I'm not looking at it as I got a really big problem or East Coast/West Coast beef. I cracked a couple of jokes about it. I'm not making a dis record about it... Twitter dissing isn't important." 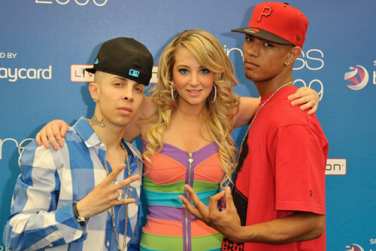 N-Dubz Star Dappy was the victim of an April Fool's prank during the band's book signing on Thursday (01Apr10) - police turned up and pretended to question him.

The U.K. hip-hop group launched Against All Odds at a shopping centre in Essex, south-east England and signed copies for a crowd of loyal fans.

But Dappy - real name Dino Contostavlos - was in for a shock when cops turned up and told him they needed to speak to him privately.

The star, who has previously been convicted of assault, was mystified as to why the officials were targeting him - until they announced it was an April Fool's Day prank, according to Britain's The Sun.

Rapper and U.S. basketball star Ron Artest is set to document his life for the American public - he has landed his own reality TV show.

The My World hitmaker and Los Angeles Lakers star has signed a deal with distributors at Tijuana Entertainment and E1 Entertainment for new show They Call Me Crazy.

According to The Hollywood Reporter, the series will follow Artest looking for new talent for his record label, Tru Warier, and making amends for his wild ways, including a 2004 brawl with a basketball fan when he played for the Indiana Pacers.

He says, "I'm really excited to have the opportunity to invite people into my world to see the real me, and show them there are many more sides to the Ron Artest they see on the basketball court. This show will allow me to share my experiences with others, and hopefully people can learn from the mistakes I've made."

An air date had not been released as WENN went to press.

Drake Vows to Give Up Interviews Over Phillip Seymour Hoffman Cover