Machine Head guitarist Phil Demmel is recovering after passing out onstage at a concert in Finland on Saturday - the latest in a string of seizures the rocker has suffered.

Demmel has a condition called cardiogenic syncope, which means his heart sometimes fails to pump enough blood to his brain, causing him to black out.

He collapsed several times onstage during the band's winter tour, with the latest incident occurring this weekend.

Demmel had to be helped from the stage, where he quickly regained consciousness and then returned to apologise to fans for "cheating them of their last song”.

Demmel later issued a statement adding: "I feel I short-changed the fans and really want to make it up for them. Thanks for all the concern." 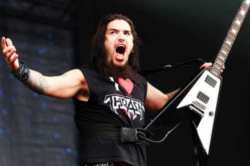