We Can't 'Bear' To Lose Our Festive Traditions

Brand New Winnie-the-Pooh illustrations unveiled to help celebrate and remind us of these 'Festive Pleasures' we can all still enjoy.
Playing parlour games, carol singing and getting dressed in your 'best' for Christmas lunch are amongst the quintessentially British festive traditions which need to be saved for future generations - that's the verdict of a new study released today. And to help us celebrate some of these Christmas traditions, a new collection of exclusive festive illustrations featuring Winnie-the-Pooh, Britain's much loved and timeless bear, has been released.
The survey of 2,000 British adults, commissioned by Egmont Publishing (publisher of the classic Winnie-the-Pooh stories), reveals that whilst over three-quarters (78%) of us look forward to Christmas-time each year and two thirds (60%) think that festive traditions are important to the celebrations, classic activities such as carol singing and roasting chestnuts are losing favour to more modern pursuits.
The research results have inspired a series of brand new classic Winnie-the-Pooh illustrations - lovingly drawn by illustrator, Mark Burgess, after the original style of E H Shepherd - which depict the characters enjoying the simple festive pleasures of old to remind the nation of the joy in these much-loved traditions.
'Winnie-the-Pooh's Festive Pleasures' most in need of saving were revealed as:
1. Playing 'parlour games' as a family, 33%
2. Carol singing, 31%
3. Making paper chains to decorate the home, 28%
4. Putting satsumas and nuts in stockings, 26%
5. Enjoying roasted chestnuts, 25%
6. Sending Christmas cards, 25%
7. Your Christmas stocking being an actual stocking, 19%
8. Getting dressed in best clothes for Christmas lunch, 17%
9. Going for a family walk together on Christmas Day, 17%
10. Opening non-chocolate advent calendars, 16%
11. Making Christmas cake, 16%
12. Putting decorations up on Christmas Eve, 15%
13. Making homemade mince pies, 14%
14. Watching a pantomime, 13%
15. Writing a letter to Father Christmas, 12%
The new Winnie the Pooh 'Festive Pleasures' illustration collection continues the 'Simple Pleasures' campaign was inspired by Winnie-the-Pooh to encourage modern families to enjoy the simple things in life whilst celebrating our great British heritage. The activities reflect the core themes in A. A. Milne's best-selling books, which centre around a series of simple adventures for Winnie-the-Pooh and his close friends in the Hundred Acre Wood - including playing the game 'Pooh Sticks'.
Nicole Pearson, Creative Director, Egmont Publishing said "Traditions, especially those surrounding the magical time of Christmas, are such a staple of the British festive season. It would be a shame if we lost some of these seasonal markers and future generations were not able to enjoy them. These classic illustrations featuring Winnie-the-Pooh enjoying Christmas together with his friends from the Hundred Acre Wood are a great way to encourage the British public to hopefully continue some of these much-loved traditions in the years to come."
Dr Martin Johnes, from the Department of History & Classics at Swansea University, discusses the history of some of these favourite festive traditions "Wearing your 'best' clothes and giving fruit and nuts in stockings both have their origins before the Second World War. Although satsumas are still given because it links parents with their own childhood, the pre-war tradition of putting a lucky lump of coal in children's stockings has disappeared."
He continues "Many Christmas traditions are imports from America, but Christmas cards are one that Britain gave to the world. The first Christmas card is widely claimed to date back to 1843, the same year as 'A Christmas Carol' was published by Dickens, but they were actually on sale by the end of 1820s. The Victorians saw them as luxurious items and bought them individually, choosing specific designs for each friend and relative. Up until the 1960s, cards were delivered on Christmas morning, adding to the specialness of receiving one."
"Inevitably, a changing world means traditions fluctuate. For example, the tradition of carol singing holds less weight than perhaps it once did - with the musical sphere of Christmas now filled with chart-topping pop songs. Similarly, with the prevalence of email and social media, the humble Christmas card is increasingly falling to the wayside."
Further festive Winnie the Pooh illustrations can be seen in The Winnie-the-Pooh Winter Collection of Stories and Poems, which features four original stories and previously unpublished works by E.H. Shepard. This treasury is the perfect gift this Christmas, and is available in hardback for £12.99.
Egmont's study also revealed that we are also a nation that loves presents, with 73% of us admitting that we exchange gifts on Christmas morning before lunch, and an extremely self-controlled 2% of us waiting until Boxing Day! And swapping gifts is not something we shy away from, with eight presents being the average number Brits received last Christmas.
Over half (64%) of British families celebrate the festive season with their own family-specific traditions, such as leaving the tree decoration to the kids - and no wonder, since 62% of us admit that the most important element in having a good Christmas is spending time with family.
Regionally, the research showed London, the North East, the South West, Wales, the West Midlands and Yorkshire and the Humber all chose parlour games as the tradition most likely to disappear. In the North West, Northern Ireland and Scotland carol singing tops their list of fading festive traditions.
A third (36%) of the East Midlands think filling stockings with satsumas and nuts is the top tradition being lost to history; whilst the South East (33%) think it's making paper chains. Festive traditions are most important to those in the North West (94%). West Midlands are the most festive, with 84% of respondents saying they look forward to Christmas. If Father Christmas wants to avoid doppelgangers, he should avoid the North East - as over a quarter of people (or their family members) in this region have dressed up as Father Christmas before. 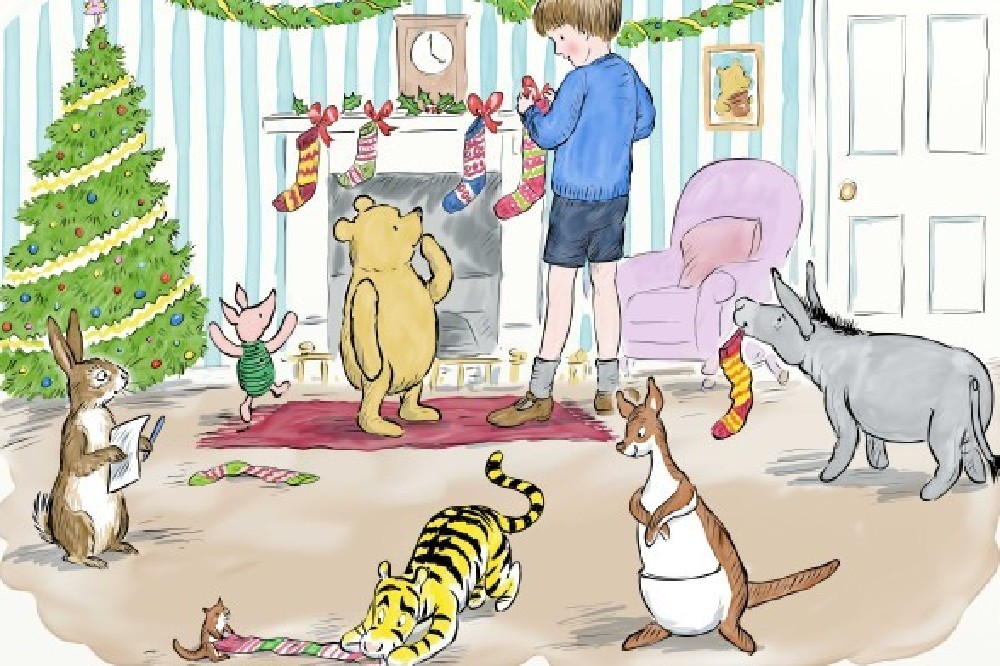 One of many Winnie The Pooh illustrations in the collection