Grandad and grandchild having fun

The new digital application will support the charity’s awareness raising efforts, across digital platforms, and not just amongst grandparents who require the services and support on offer.

A number of MPs and childcare industry stakeholders attended the event, which took place at The House of Commons on Friday 26 October,  including MP David Blunkett and former children’s minister MP Tim Loughton, amongst others.

Lynn Chesterman, CEO of The Grandparents’ Association is delighted to have revealed the new app. She said: “Fundraising is becoming more of a struggle every month, so we have to look at new and innovative ways that we can boost our efforts.

“This new digital platform is not only a great way to celebrate our 25th anniversary, but it is also expected to raise awareness amongst grandparents and the millions of people in the UK who support the rights of grandparents.”

Tom Harrow, CEO of online childcare search site, Findababysitter.com, said: “It’s encouraging to see charities such as The Grandparents Association embracing technology for a good cause.

“Findababysitter.com sits on a digital platform, and provides over 170K people with access to cost-effective childcare solutions every second of every day.  In the UK there’s 14 million grandparents, and a large majority of them are expected to look after their grandchildren on a regular basis. 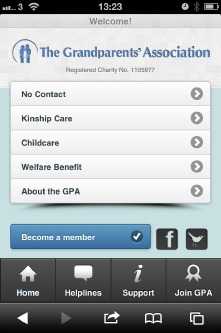 "At Findababysitter.com, we provide parents with accessible, cost-effective childcare solutions in their area, which frees up grandparents to enjoy their retirement years, and do all the things they’ve spent their working lives dreaming about," he added.

The creator of the app, Joseph Scott, web director of Juiced Media said: "Having worked with the Grandparents' Association for the last five years, we’re very excited to present an exciting iPhone app that will make the Grandparents' Association more accessible, enabling those who need their help to obtain it in an easily accessible and portable format. With the app, advice, information and direct contact is only a click away.”

Findababysitter.com is due to launch its annual childcare report in January 2013, which will include more details on its collaborations with The Grandparents’ Association.