As part of the annual Soft Toy campaign, for every soft toy and children’s book purchased in stores before 23rd December, the IKEA Foundation donates 1 Euro to UNICEF and Save the Children to support children’s education programs throughout the world.

Celebrity mum of two, Tamzin Outhwaite greeted excited children at the IKEA Wembley store before launching the Children’s Take Over Day, beginning with a giant game of hide and seek. The fun continued throughout the day with a variety of activities designed to inspire creativity and encourage children to use their imagination.

I think the IKEA Soft Toys are perfect stocking fillers for kids and a great way to raise money for a great cause, helping children all over the world get a better education

As part of the day children enjoyed activities including a Soft Toy puppet show, teddy bear picnic, arts and cooking classes as well as participating in a colouring competition to design their dream soft toy for a chance to win a prize for their school.

Speaking from the event, Tamzin said: "As a mother I strongly believe that having a good start in life and access to a proper education is essential and something every child deserves.

"That's why I'm so proud to be involved in the IKEA Soft Toy campaign and to have taken part in this really fun event that allowed children to let their imagination run wild as they got creative with their play for the day.

"I think the IKEA Soft Toys are perfect stocking fillers for kids and a great way to raise money for a great cause, helping children all over the world get a better education," Tamzin said.

The Children’s Take Over Day coincided with the release of research by IKEA that revealed traditional toys could appear higher on the Christmas list this year. The research showed that 44 per cent of eight-year-olds prefer to play like their parents did, picking creative arts and crafts over computer games.

Creative play activities such as painting, baking or drawing, are also more popular than watching cartoons or playing computer games, with over a quarter (27 per cent) of 7-10 year-olds picking arts and crafts as their favourite past time.

The research also revealed that over three quarters (79 per cent) of the parents questioned said they thought creative play was important for their child’s development. Despite this, 23 per cent admit they prefer playing computer games with their children when they have the time, closely followed by sporting activities, with just 1 in 10 parents choosing creative activities such arts and crafts as their top choice. 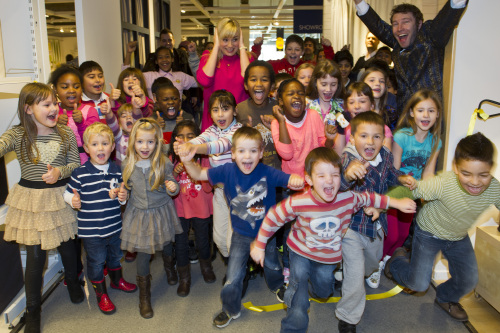 Carol McSeveney, UK and Ireland Children’s IKEA Manager, said: “We believe children are the most important people in the world, which is why we support UNICEF and Save the Children with our yearly Soft Toy campaign.

"Since the campaign started in 2003, donations from the annual IKEA Soft Toy Campaign have totalled €47.5 million, helping 8 million children in more than 40 countries enjoy their right to a quality education. The Children’s Take Over Day was a great way for kid’s to get involved this year and we hope all who attended had a great day.”

Children from across the UK can also take part in the IKEA colouring competition that will be taking place in IKEA stores from November 12th – December 3rd. The competition will see children designing their dream soft toy for a chance to win a prize for their school. For more information, visit your store’s local webpage at www.ikea.co.uk or ask at your local IKEA store.