Penelope Cruz has confirmed she is pregnant with her second child.

The 'All The Pretty Horses' actress, who already has two-year-old son Leo, with her 'Skyfall' actor-husband Javier Bardem, will not travel from the US to attend the Goya awards in Spain on February 17 because of her pregnancy, her publicist Javier Giner told broadcaster RTVE.

The 43-year-old beauty is nominated for Best Leading Actress at the ceremony and is said to be "extremely happy and very excited" with the news but didn't want to take a long haul flight.

Penelope and Javier, who had been friends for years, started dating in 2007 and married in early July 2010 in an intimate ceremony at a friend's home in the Bahamas.

Penelope has previously spoken out about how motherhood has transformed her life.

She said: "From the first second, you feel so much love.

"It is a revolutionary experience. That's the best way I can describe it. It transforms you completely, in a second.

"Nature is very wise and gives you nine months to prepare, but in that moment, when you see that face, you are transformed forever."

She is also determined to keep her kids out of the public eye, despite her's and 43-year-old Javier's successful careers.

She explained: "I want my son and my kids - if I have more - to grow up in a way that is as anonymous as possible.

"The fact that his father and I have chosen to do the work we do doesn't give anybody the right to invade our privacy." 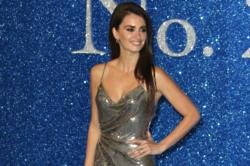