Both are supporting the youth charity’s Tomorrow campaign, which launches today and urges employers to recognise young people as tomorrow’s industry leaders.

Kelly Hoppen will mentor 28-year-old Fay Martin, who overcame unemployment with help from The Prince’s Trust, to design a home interiors product that will be sold on QVC later this year. QVC will also support the mentoring process, providing guidance on product development and retail.

Kelly Hoppen MBE said “At this time of record-breaking youth unemployment, we need to cultivate young talent and give young people hope.  Allowing young people to understand how successful businesses started out will give them the inspiration and confidence to do it themselves.  I hope that, by sharing my experiences, I can help young people to pursue their own ideas.”

Before coming to The Prince’s Trust, Fay had been unemployed for six months. She suffers from a chronic illness which makes it very difficult for her to hold down a full-time job, and at one point, her symptoms got so bad that she couldn't work.

As time went on, Fay started to feel increasingly anxious, and her self-esteem hit an all time low. She said: "When you're at home all day, you have no reason to go out and meet people. You get bored and depressed and it really affects you mentally."

Sometimes, Fay would stay inside for days at a time without talking to anyone. She said: "I didn't have any money to go out with friends so I became increasingly isolated."

When Fay felt able to apply for jobs, she found it much harder than she expected.

She said: "I got so many rejections and after a while I started to feel worthless. It was depressing that I couldn't even get a simple day job.  I started to realise that I wouldn’t be able to go down the path I thought I would as I had to contend with my illness."

However, Fay had a talent for design, having previously studied illustration and worked as a visual merchandiser. She dreamed of turning her passion for design into a business, and decided to approach The Prince’s Trust for help.

She joined the youth charity’s Enterprise Programme, which provides practical advice and mentoring support to young people interested in setting up their own business. With help from her Prince’s Trust mentor, Fay set up a greetings card business called Fay’s Studio.

Running her own business means that Fay can work at her own pace, and she is better able to manage her illness.

Today, she produces high quality greetings cards, book illustrations, design commissions and bespoke paintings. Her designs have been used by retail chain Next and her greetings cards are currently stocked in Paperchase.

Fay says: "It’s a huge privilege to be involved in the The Prince’s Trust Tomorrow campaign and be able to work with someone as talented and experienced as Kelly Hoppen. With support from The Prince’s Trust, I’ve been able to achieve things I never thought possible. I hope that, through the Tomorrow campaign, I can inspire other young people not to give up on their ambitions.”

Philip Van De Merwe, Buying Director Fashion and Home, QVC said: “We have been working with Kelly Hoppen and The Prince’s Trust for several years now, so it’s a natural step for us to be involved in the Tomorrow campaign. At QVC, we are always looking for fresh talent and it’s great to see one of our established designers helping a young person to break into the industry. We’re looking forward to seeing the product they create together, which will be sold exclusively on QVC to raise money for an important and worthy cause.”

The Trust is urging unemployed young people to visit a new website, www.princes-trust.org.uk/tomorrow, which provides advice, inspiration and support for those struggling in the current climate.  Joanna Lumley, Jamie Oliver, James Caan and Alan Titchmarsh are among those who have shared their stories of how they reached the positions they are in today. 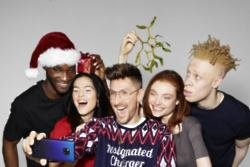