Britain's Prince Philip was a hit with the public at Plymouth University when he unveiled a £19 million new state-of-the-art marine building.

The 91-year-old royal got the crowd laughing as he officially opened the university's £19 million new state-of-the-art marine building.

The Duke of Edinburgh unveiled an inscription on a boulder outside the building, and teased the crowd by saying: "Are you ready for this?"

He then joked: "There's a spelling mistake."

Philip was also awarded an honorary doctorate in marine science by the university, becoming the oldest royal in British history to be given such an accolade.

Sporting the university's traditional robes, he gave a light-hearted speech at the private ceremony expressing his gratitude.

The fun-loving royal said: "I'm delighted to have this. It's now quite a long time since I started my university career. But unlike most people, I started at the wrong end.

"I became Chancellor of the University of Wales in 1947 and have been going downhill ever since." 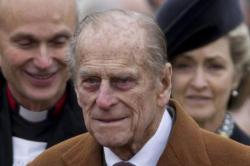