Princess Diana's Dresses to Be Auctioned

Ten of Princess Diana's dresses - including one she wore to dance at the White House with John Travolta - are estimated to fetch over £800,000 when auctioned next month.

Ten of Princess Diana's dresses are estimated to fetch over £800,000 when auctioned next month.

The collection - to go under the hammer in London - includes a midnight blue Victor Edelstein midnight-blue silk velvet outfit which the late British royal wore when she danced with movie hunk John Travolta at a White House ball in 1985. That dress alone is valued at up to £300,000.

A spokesperson for Kerry Taylor Auctions, who are holding the sale, said: "These elegant couture creations were made by some of her favourite designers.

"One of them - a dark green velvet dinner gown - has what appears to be the print of a small hand on the skirt, possibly that of a young prince?"

"Diana was photographed wearing them not only by the paparazzi, but by some of the leading photographers of the day - including Mario Testino and Lord Snowdon.

"Some of the gowns were worn for official State visits to Austria, Australia, Brazil, India, South Korea and the United States of America."

The dresses were originally sold in a charity auction at Diana's request in New York in June 1997, just two months before she died in a car crash.

The sale 'Fit for a Princess: Important dresses formerly in the collection of Diana, Princess of Wales' will take place March 19. 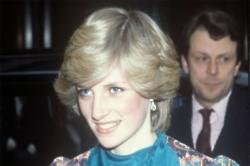