According to Stuff.co.nz, The Department of Internal Affairs have released a breakdown of the royal couple's November visit, which totalled $1,395,876.

The pair spent almost a week in New Zealand before flying over to nearby Australia and their trip cost nearly NZ$400,000 more than when Prince William, Duchess Catherine and their son Prince George took in the country in April 2014.

It was also more than three times the NZ$426,317 which was spent on Prince Harry's visit in May last year.

More than NZ$494,000 was spent on personnel who accompanied Charles and Camilla and their aides around the country.

What's more, over NZ$135,000 was said to have been spent on food, travel-related expenses and accommodation for the pair.

During their time in New Zealand, they were fed mince and cheese pies as well as Lemon & Paeroa beverages.

The pair started their week-long trip by attending a welcome ceremony at the Government House in Wellington and they also headed to Pukeahu National War Memorial Park to unveil a Commonwealth Walkway Plaque.

It was the first time they had visited the country for three years. 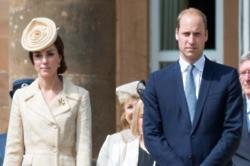 Prince William allegedly has people 'bending over backwards' for him