Former world heavyweight boxing champion Mike Tyson had an offer of honorary citizenship withdrawn by authorities in Shanghai, China, after delving into his murky past.

The 39-year-old big-hitter was due to receive the citizenship for the city's Luo Dian district during a three day visit to the sprawling metropolis which began on Thursday (30MAR06).

However after inspecting Tyson's past, including his jail term for rape in the 1990s, local government chiefs overturned their decision.

Luo Dian district vice chief Wang Qiquan says, "We didn't think it was appropriate to make Tyson an honorary citizen so we dropped the plan.

"Many people said (the honorary citizenship) would be inappropriate.

"For one thing it will be the first time Tyson has even visited our town... he has also been involved in too many legal and sporting scandals."

She gushed, "He is a king boxer. He is tough and brave, aggressive and indomitable. "I don't know the ins and outs of his private life but I always teach my boxers that to be a good human being, that is the most important thing."

Tyson became the youngest ever boxing champion when he won the world heavyweight title in 1986 aged 20. 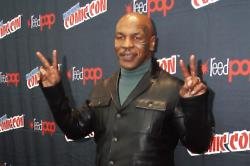