Manchester City have one foot in the quarter-finals of the Champions League after a comfortable 4-0 last-16 away leg win at FC Basel. 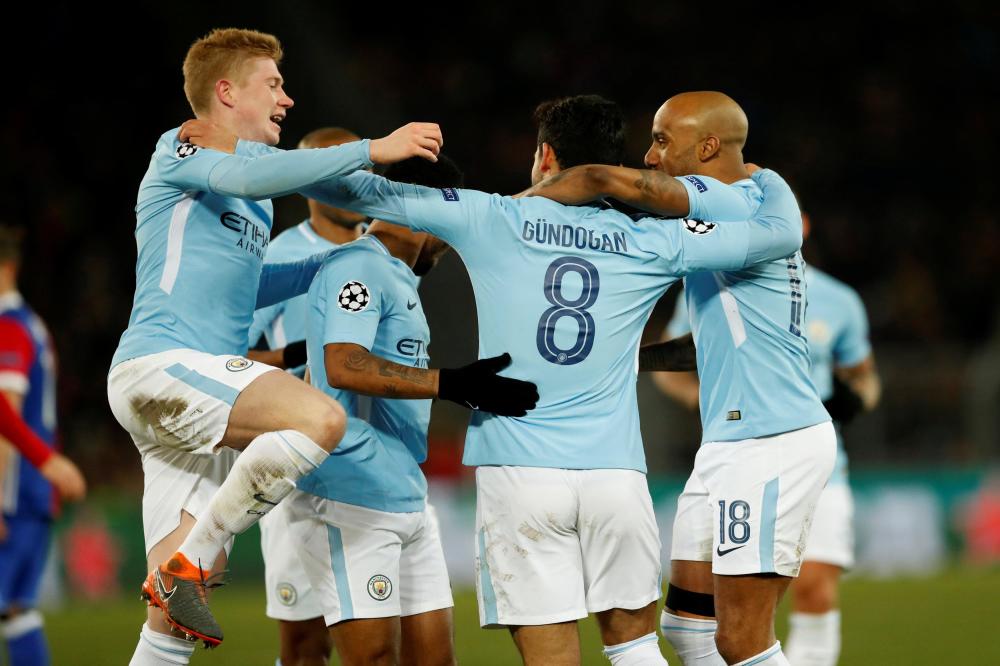 Pep Guardiola’s side have been made favourites to win the tournament this season and they lived up to their billing as goals from Ilkay Gundogan, Bernardo Silva and Sergio Aguero had them leading 3-0 after just 23 minutes against the Swiss outfit at St Jakob-Park.

Gundogan grabbed his second of the night after the interval as City look set to ease into the last-eight looking ahead to their second leg at the Etihad Stadium.

City almost went ahead in the second minute when Bernardo Silva’s cross into the area found Gundogan in the area and his header brought a decent save out of Tomas Vaclik.

Basel had a good opportunity to score against the run of play on six minutes when Dimitri Oberlin got in behind the City central defensive unit but scuffed his effort wide of the goal with just Ederson to beat.

On 12 minutes Nicolas Otamendi will have been relieved when the referee ignored Basel penalty claims after he appeared to barge over Oberlin inside the area.

City responded quickly and took the lead in the 14th minute when Kevin De Bruyne again provided the assist with a ball into the box which Gundogan met before powering a near-post header past Vaclik.

Four minutes later it was 2-0 to the visitors when Raheem Sterling’s deflected cross dropped kindly to Bernardo Silva and he lashed an effort into the top corner after Vaclik could only flap at his shot.

City had found their rhythm now and it was no surprise when Aguero hammered a low effort into the bottom corner form 25 yards after just 23 minutes.

It remained one-way traffic and, after a couple more half-chances, De Bruyne went close to scoring a fourth on 37 minutes when his first-time left-foot strike from the edge of the area dropped onto the roof of the Basel net.

The hosts almost pulled a goal back just four minutes into the second half when Mohammed Elyounoussi turned away from Fernandinho and hit a curling strike towards the far corner which Ederson did well to tip wide of the post.

But City grabbed a fourth to seal the game, if not the tie, on 53 minutes when Gundogan picked up a pass from Aguero and drifted past a defender before curling an effort into the top corner of the net.

Substitute David Silva looked to make it five on 66 minutes but he could only scoop the ball over the top after meeting Kyle Walker’s pull-back from the right in the middle of the area.

A minute later Oberlin spurned a great chance to pull one back for Basel but he somehow headed wide at the near post after good work by Valentin Stocker.

On 74 minutes Vaclik produced a brilliant save to deny Gundogan a hat-trick after the German met an Aguero cut-back inside the area.