Andy Roddick had to come through a second set fight back from qualifier Lu Yen-Hsun before seeing him off in three sets.

Roddick has had a stuttering start to the Asian Swing crashing out of the Beijing Open last week but he looked to have put that behind him as looked to be in complete control of the match in the opening set.

He broke twice and never faced a single break point of his own as he was dominate on serve - taking the set 6-2.

Into the second set and Roddick had more chances to break Lu but he squandered all four opportunities.

And Lu made the former number pay for the missed chances as he broke Roddick to take the match into a third and final set.

Here Roddick composed himself before breaking on two more occasions to wrap up a 6-2 3-6 6-2 victory.

Speaking to Reuters after the match Roddick said: "He plays so high risk with a lot of breaks.

"I had more break opportunities and didn't get them. But overall, I played better.

Roddick will now face Grigor Dimitrov in the second round as the Bulgarian saw off Marsel Illhan 2-6 6-1 6-4.

David Nalbandian was also in action on the opening day of the Shanghai Masters as he faced Ernests Gulbis in his first match.

He broke Gulbis on three occasions during the match to seal a 7-5 6-4 victory over the Latvian.

He will now face Florian Mayer in the second round as the German came through 6-0 6-2 against Fabio Fognini.

Paire No Match for Ruthless Federer 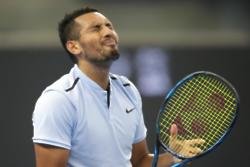