Uber Eats have unveiled their new drone, with rotating wings, which the company hope will stop food spillages.

The food arm of the technology company will make their first food deliveries via drone in the San Diego area of California, before hoping to extend it out across the United States.

The drone has been designed with rotating wings, which the company are hopeful will stop food spillages because it allows for easier movement from vertical takeoff to forward flight.

It has been reported that the drone can easily carry a meal for two, transporting it in just eight minutes across a distance of 12 miles.

Meanwhile, Luke Fischer, Uber Elevate's head of flight operations, had revealed the team were working on how to get the drone to successfully land.

He said previously: "There have been many attempts at drone delivery: landing on mailboxes and in backyards with parachutes attached. But we run into the same problems with those. It simply doesn't work in dense urban environments where people don't have backyards, don't have drone capable mailboxes and don't have backyards for parachutes ... We believe that Uber is uniquely positioned to take on this challenge as we're able to leverage the Uber Eats network of restaurant partners and delivery partners as well as the aviation experience and technology of Uber Elevate." 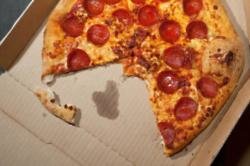