The new aircraft will take flight this summer

The aircraft took to the skies for an aerial display, the first of three during the week-long event, marking the first time Boeing’s Dreamliner has participated in a flying show.

The global debut of the airline’s new Dreamliner in Qatar Airways’ colours marks a significant milestone for the manufacturer’s 787 Middle East launch customer, which will take delivery of five 787s during 2012.

“The 787 will create new benchmarks in comfort and space across both our Business and Economy cabins."

Akbar Al Baker, Qatar Airways Chief Executive Officer, said that Farnborough was the ideal platform to showcase the latest addition to the airline’s modern fleet, for the very first time.

“This is a very proud moment for Qatar Airways and my country, the State of Qatar,” he said. “As an airline, we have continued to push the boundaries and set new standards in global aviation for more than a decade to create a world class airline.”

“The delivery of the first of our 787s reinforces our commitment to continue this trend and invest in next generation aircraft, with the aim of having the youngest and most technologically advanced fleet in the industry,” he added. Innovatively planned, the 787 has a seat design that is revolutionary, a result of Qatar Airways working closely with the manufacturer to have custom-made seats fitted on the aircraft, with space and comfort a hallmark of both economy and business cabins.

The seat configuration on board Qatar Airways’ Boeing 787 makes it an industry leader with innovative interior designs. Business Class is configured 1–2–1 featuring 22 seats that convert into fully flat horizontal beds, while the 232-seat economy cabin has a 3–3–3 layout.

“The 787 will create new benchmarks in comfort and space across both our Business and Economy cabins and continue to allow us to offer an unrivalled inflight experience and unparalleled signature Five Star service on board to existing passengers and new ones,” Al Baker said.

Akbar Al Baker was joined by Boeing Commercial Airplanes’ new President and Chief Executive Officer Ray Conner, together with key figures from the UK travel industry, corporates and international media for the unveiling. 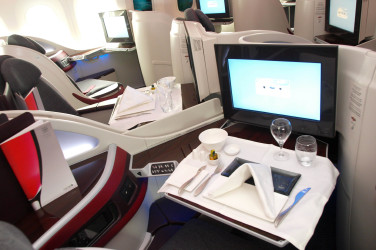 Other key features of the 787 include an award-winning iTouch control unit, over 1,000 movies, programming and audio entertainment options, an iPort, USB port, remote data outlet, a custom designed culinary offering, plenty of storage space for personal items and more – all available in every seat across both cabin classes.

Qatar Airways is set to be one of the first airlines to commercially fly the Dreamliner to the UK as the 787 prepares to make its long-haul debut between Doha and London Heathrow.

Are you visiting Farnborough Air Show? Send us your pictures on twitter @FemaleFirst_UK and tell us what you think of the new Boeing 787 below in the comment box.