The Northern Lights: Top tips and Alternative Trips to get the Most out of the Aurora Borealis

Aurora Borealis is on the bucket list of every traveller, but the lights are notoriously unreliable. What can you do to make the most of your trip and make sure you bring back something to remember?

There are many stories of expensive Northern Lights excursions which resulted in nothing but looking at clouds, but 2012-2013 is the Solar Max period, which means that the chances of seeing the Aurora Borealis are at their highest in the 11-year cycle.

As there is never a guarantee of seeing the phenomenon, here are some Northern Lights getaway ideas with a few add-on activities, so that your trip is not a waste when your excursion is cancelled due to a bit of fog.

Oh, and expect to break the piggy bank for these ones, they can get a bit pricey.

So what, you never saw the lights, you still scrambled through the thick snow of Iceland, discovering the rivers, mountains and beaches of the enormous, desolate and stunning landmass. During this Iceland Travel package, you will also see Gullfoss waterfall and Þingvellir National Park, as well as exploring the capital city Reykjavík.

For a family of four, a three-day truck adventure with Iceland Travel reaches around £1,700.

Flights from London to Reykjavík for a family of four with SAS reach around £750.

A crab safari, I hear you say, what’s that? Well, it’s essentially crab fishing out on a frozen sea, but if your day out on Blackpool Beach springs to mind, then think again, because these crabs commonly grow up to six foot and weigh around two stones.

If you’re a seafood lover, then good news, because the crabs caught on the safari often double up as dinner.

Hopefully you will be alert and awake during your crab safari after a good night’s rest in the famous snow hotel.

Much as the name suggests, the snow hotel is made completely of snow and ice but treats visitors to a night of wonder and luxury.

The hotel is rebuilt every year and this year’s hotel offers 40 rooms, king and queen beds and a drinks bar.

A three night stay for a family of four with Nordic Visitor will cost around £5,000.

For four people, flights From London to Kirkenes with SAS will reach around £800.

Say a quick hello to Santa in Finland

This year’s Christmas break is fast approaching and it will be over before you know it. You likely haven’t got spare stacks of cash lying around and you probably haven’t budgeted for a family trip to Lapland this year, but maybe you could start planning this one for next Christmas. 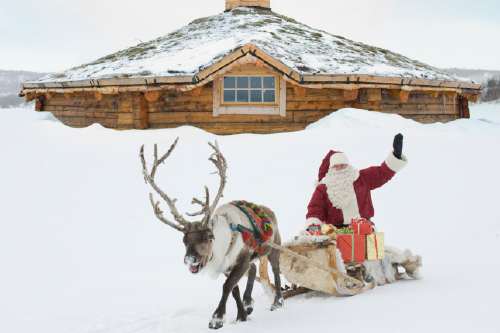 Visit the man himself in Santa Claus Village before setting off on a snowmobile adventure to see the lights themselves. Great for the family, this trip offers a bit for everyone.

The kids will probably enjoy the lights as much as seeing Santa and if you’re honest with yourself, you’re already getting a bit excited about the prospects of meeting the big man too.

Maybe you could put it on this year's Christmas list?

Three nights for a family of four reaches around £3,200 with Nordic Visitor.

Flights from London to Rovaniemi will reach around £900 for a family of four with Finnair.

Go to a festival in Norway

It's back to Norway again, but you're in for a bit of a strange one with this trip, as this festival isn't just any standard music festival - it is the Ice Music Festival.

Those quirky Norwegians get together each winter and put on a whole festival for music played on instruments made of ice.

The festival is timed to coincide with a full moon, meaning this year's festival is from Thusday, 24 January to midnight on Saturday, 26 January.

Fortunately, Aurora Borealis sightings do occur in the small town of Kikut and if you still don't manage to see them, a bit of skiing in nearby Geilo will cheer you up.

Three nights in Kikut Fjellstue hotel for a family of four will reach around £950.

Flights from London to Oslo with Ryanair for four people reaches around £160 - plus the usual baggage and booking fees.

Try your chances in Scotland

Although you will have a low chance of actually seeing the lights in Scotland, your piggy bank can stay in one piece and your passports can stay at home.

The best place in Scotland is Orkney – an island just mainland tip accessible by ferry. However, If you’re worried about a little seasickness, then Thurso is the ideal spot as it is the northernmost town on British mainland.

Two double rooms in the Station Hotel in Thurso reaches just under £450.

Flights for this trip are not worth the money and the train journey can take up to a day. The best bet would be to make this one a family road trip.

Have you seen the Northern Lights? Tell us all about your experience in the comments below or tweet us @FemaleFirst_UK