America may have stolen a lot of the TV headlines in 2012, but plenty of cracking shows came out of the minds of the UK’s creative crowd this year.

So as the end of the year rolls around, we’ve gotten our shiny medals out to reward the best and brightest of British TV. 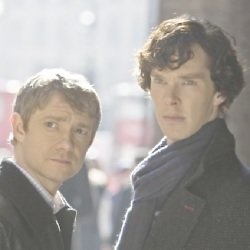 We thought that after Sherlock’s stunning first season that it simply couldn’t get any better. We were wrong, as Steven Moffat’s crime thriller just flowered this year into one of the best shows on TV and definitely one of the highlights of the year.

The show’s first episode alone could have taken the title, with A Scandal In Belgravia being the single best episode of television we saw this year. Period. It combined all the best parts of Sherlock (Benedict Cumberbatch, the central relationship, Mycroft and Moriarty) with the singular best Irene Adler we’ve ever seen on screen.

While Hound Of The Baskervilles was a slight drop in quality, the rousing, Moriarty centric finale was absolutely everything we could ever have hoped it to be, with Andrew Scott captivating in the villainous role.

We only wish there was more than the trio of episodes, but when they’re this good, we’re just grateful they’re around.

In a fairly disappointing year for British comedy, Moone Boy was the best show to hit our screens this year. Before you say anything, yes, we know Ireland isn’t really in the UK, but just roll with it alright?

While The Thick Of It wrapped itself up in a fashion only it really can, with its own version of the Leveson enquiry and Twenty Twelve impressed, it was Chris O’Dowd’s sitcom that really caught the eye this year.

The story of a young boy and his imaginary, banjo playing best friend growing up in rural Ireland, this was a show that delighted in getting surreal humour in the little things, be it over cooked broccoli or being covered in make up by an evil sister.

We can’t wait to see what the second series has in store for us.

A show about a group of midwives in the 1950’s may not sound like riveting TV, but Call The Midwife  was an utterly beguiling mix of comedy and tragedy, with just the right levels of melodrama added in to spice it up a little.

Adapted from the novels of the same name, Call The Midwife was centred on the exploits of midwives in 1950s London, looking at both their professional and personal exploits and resulted in six episodes of fantastically feel-good TV.

The real surprise came in the shape of Miranda Hart, with the comedian’s first dramatic acting performance winning the hearts of a nation as Chummy, the golden hearted toff of the group. While the funnier sides of Chummy were child’s play for her, Miranda took to the more dour side of the part like a duck to water.

It instantly found a home too, as it became the BBC’s highest rated debut drama series ever. As we’re writing this before it airs, we can’t wait to see what the show’s Christmas special has in store for us. 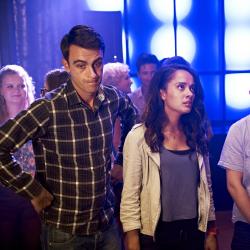 While the last series of Misfits struggled to keep up with its brilliant forebears, Rudy always brought a horribly big grin to our faces whenever he’d show up.

The show may have struggled with its new cast of characters, but Rudy turned from clown to leader with surprising ease, a constant source of comedy while actually managing to do more than just mess about.

When his shtick was just about to grow tired however, the show made a massive gamble that paid off massively. They made Rudy fall in love. With a nun.  It was here that Joseph Gilgun really earned his pennies, giving Rudy before unseen levels of depth while still managing to keep the idiot we all at its core.

That transition and the last episode of this fourth series as a whole have turned Rudy from a hilarious TV character to a truly great one. 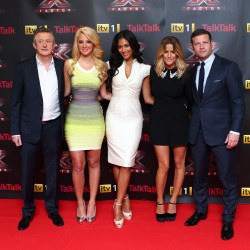 We’ve ragged on this series of X Factor a lot over the last few months, but yet again, the latest series of the talent show has been a massive decline over last year’s offering.

This year’s competition has just left us with a show in rapid decline. A lack of great talent depth, judges just seeming to go through the motions and a show desperately in need of ideas mas made this ninth run of the show feeling flatter than week old lemonade in Holland.

With viewers also bailing out of the reality show, drastic measures will need to be taken to make sure that the show’s tenth series next year doesn’t completely fall flat on its face. 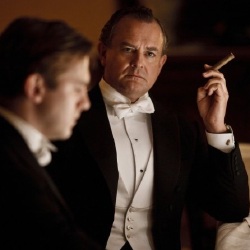 Let’s face it, series 2 was pretty bad. Lurching from one ridiculous plot point to the next, the show’s second outing was a massive fall from grace for the ITV drama. Thank goodness then that the most recent run of episodes from our favourite Lord and Ladies restored our faith in the Julian Fellowes drama.

Yes, this series had the occasional bit of ridiculous melodrama, but when it decided to go over the top, it did so in the right way, making the demise if (SPOILERS) Lady Sybil a grand, ridiculous and completely emotionally draining affair.

Getting back to the characters and the warm-hearted humour we all fell in love with two years ago, Downton Abbey’s comeback was great news for the show’s legions of fans.

Agree, disagree? Let us know in the comments and check out what won our awards from America's crop of shows right here and tune back in tomorrow to see us start our countdown of our favourite shows. 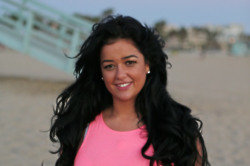 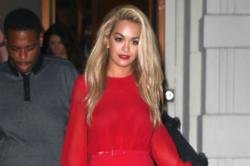