Dominic Cooper will play Ian Fleming in a new TV series about the James Bond author.

The 'Mamma Mia!' actor has signed up to play the legendary writer in a four-part drama series, following on from the success of the 23rd movie in the British spy franchise 'Skyfall'.

A source told The Sun newspaper: "Skyfall has got punters really excited about Bond, even more than usual, so it just makes sense to bring forward the production of this biopic."

The biopic - simply entitled 'Fleming' - will explore the life of the author, who died in 1964.

Despite being born in London and being a naval intelligence officer for Britain, he enjoyed writing his Bond novels in the comfort of his Jamaican home.

A heavy drinker and smoker, he had a heart attack in 1961 from which he never fully recovered, and died three years later in Canterbury, England.

It will be the first time Dominic has taken part in a TV role since narrating the series 'Promzillas'.

He has roles coming up in 'Dead Man Down' and 'Cities'. 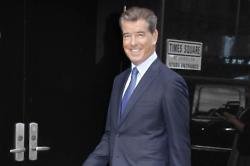 Pierce Brosnan: My Version of James Bond Was Less Sexist