Details given on Netflix's Marvel originals - could The Punisher get his own series?

Launching its Marvel property earlier in the year with the debut of the first season of Daredevil, Netflix has shown to be a strong ally to the comic book brand and is now ready for some huge expansion which fans have been teased with since day one.

Three further Marvel series - Jessica Jones, Luke Cage and Iron Fist - have been planned along with a major team-up crossover event - The Defenders.

Now though with big names joining the roster such as The Punisher for the second season of Daredevil, fans have been hoping for even bigger possibilities from MCU Netflix, and thanks to the Television Critics Association, viewers now have a little more information on where the characters are headed.

Firstly it was revealed that the Jessica Jones series would definitely come in the "fourth quarter of 2015" - later than we had expected but guaranteed before next year. This show will introduce The Purple Man to the MCU and launch another Marvel Netflix superhero series with Luke Cage, expected in the first half of 2016 with a firm date still to be revealed.

Once all four solo series have had their Netflix run, Daredevil will join Jones, Cage and Iron Fist to unite as the superhero team The Defenders, showing that Marvel have a little caution when it comes to launching the team up of "street level heroes".

Variety writer Laura Prudom was in attendance at the TCA and noted:

Once all four Marvel Netflix shows have been launched, they'll cross over for Defenders, but "some will selectively have multiple seasons"

Netflix CCO Ted Sarandos also stated at the event: "I think ideally there will be a rhythm of about every six months you'll get a new season or a new series from the Defenders group. And then they'll crossover into a combined [Defenders] season once we've launched the first season of each of the four characters... Some will selectively have multiple seasons as they come out of the gate. So they'll probably be two launches a year."

With Jon Bernthal as The Punisher in the MCU, he's to make his debut in Daredevil season 2 and naturally, viewers are speculating whether his character could hold his own in a violently gritty Netflix original.

Asked that very question during TCA, Sarandos replied: "It is possible for sure. That's the beauty of the Marvel universe. Any of them could spin out into films too."

Daredevil is currently available on Netflix. Jessica Jones premieres in Fall 2015, followed by Luke Cage and Daredevil season 2 in 2016. 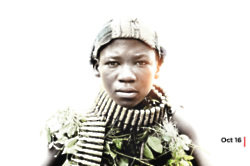