WWE: The Undertaker has his sights set on Brock Lesnar - match scheduled for Summerslam

Returning to the WWE at Battleground, The Undertaker returned for a rare appearance on Monday Night Raw yesterday (July 20) to call out Brock Lesnar and address just why he was going after 'The Beast Incarnate'.

Talking about Lesnar breaking his streak at Wrestlemania, the Deadman said: "Lesnar, you had to continously, week after week, month after month, remind everyone of your greatest accomplishment, and now, I say, enough.

"You have taken what once was smoldering ashes and turned it into a raging inferno. Last night was my true resurrection. You see, Lesnar, you can't kill what won't die. Unleashed forces will now set our careers towards new destinies and I will challenge your mortality. I will conquer what has yet to be conquered. And in the end, just like all living things, be it man or beast, you will rest in peace."

Later on in the same edition of Raw, Paul Heyman took to the ring to badmouth Undertaker and bring up once again just how Lesnar beat the Wrestlemania streak.

"You can sell your soul to the Devil, but your ass belongs to Brock Lesnar!" Heyman spat, before Undertaker's terrifying gong hit once more and the arena was plunged into darkness.

The Deadman then appeared in the ring looking ready to attack a pleading Heyman, but when Lesnar's music then hit and the beast came out to attack, even the commentators decided to flee.

Security was rushed out to break up the fight - a small preview of what's likely to come at Summerslam - but that couldn't hold the two warring contenders from one another.

Triple H continued to bring out WWE Superstar after Superstar to try and pull the two off each other, but even a huge portion of the roster couldn't keep the two from landing big blows on each other's heads.

"THIS IS AWESOME!" chanted the crowd - and it truly was. A goosebumps moment to truly remind the fans of the brilliance the company can bring when its plans all fall in line. 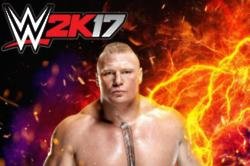