Underemployed wings its way over to the UK this week on MTV and sees Michelle Ang star as Sophia, one of five friends struggling on that first rung of the job ladder and still trying to live out the dreams they set out for themselves in college.

We spoke the New Zealander about her part in the show, that doughnut hat and her love of chemistry.

So, what can you tell us about Underemployed and your character Sophia?

Underemployed is the story of five best friends stuck in today’s economy. So that’s the changing face of how hard it is to find a job for graduates coupled with the age old challenge of becoming an adult. Transitioning from that stage of dreaming of what you’ll do what your adult to actually having to pay your own bill and become parents.

It’s quite a universal story and it’s also quite unique in that I think we’re viewing it quite optimistically. The five friends really view their friendship and the lives they live as more important than the jobs they have or the money they earn.

My character Sophia is kind of the centre of the eclectic group. At first she seems quieter and more reserved than the rest of the group, but the truth is that she’s kind of the eye of the storm. She’s the one that all the friends relate to and throughout the series you see her grow into something more. She’s got an interesting journey.

Your character evolves a lot throughout the series, how was that to play?

A lot of fun because it was always challenging. She was always changing and there different aspects to her which is always very exciting to play as an actress. She’s a great character and everything changes with her throughout the series, from how she viewed the world to what she wanted to wear clothes wise.

Speaking about clothes, we have to ask about the doughnut hat.

That’s become quite the iconic piece of the show! It’s funny because there was no real design philosophy to it, it was literally was just a great big rubber doughnut glued onto a headband that was very temperamental. I wanted to throw it across the room about 80% of the time.

It’s kind of a piece of the puzzle though, as Underemployed is about people working jobs that are less than ideal and that humiliation and irony of having to wear something like that is exactly what depicts that situation.

Have you ever had to take on an awful job to tide you over?

Absolutely. Anyone who signs up to be an artist has to pay the bills somehow and most of the time that’s not in the arts so I’ve had to work for terrible bosses in hospitality and things like that.

When  I first got to America I had to work for a big director, who I won’t name, but he always wanted me to be beside him, but not to see me. So, I had to stand one step behind him always.

You won the at award for Outstanding Lead Actress the New Zealand Film Awards in 2011 for My Wedding And Other Secrets. What was that like for you?

I have to tell you, that was so amazing. Never in my life did I think I’d be up for an award like that, but that particular project was super close to my heart. I really poured my heart and soul into making it, somehow it did well and I was honoured to be put into the competition, but I was against some pretty heavyweight actresses with amazing bodies of work. I remember that I was actually in New York and got a whole bunch of text messages saying I’d won. It was really incredible.

Like many Kiwi and Aussie actors, you did your stint on Neighbours. What is it about that show that breeds so many great actors coming from it?

It’s being going on for a long, long time, so the whole vibe on the production of Neighbours is like drama school. Purely for the speed they work at, the different places you’re shooting, it’s quite a big working beast.

As an actor when you join something like that you have to find you r feet very fast. So it’s probably quite a good training ground for television. I had a blast, I was on there for a year and got to play a really cheeky fun character.

On the other side of acting coin, you’re going to be in Top Of The Lake. What was it like working with a Kiwi legend like Jane Campion?

I had to constantly keep pinching myself. Like you said, she’s completely iconic and terrifying as a director because her ability to tell stories of such truth and subtly is super demanding. But it was so great because we were shooting in a really beautiful part of New Zealand around Queenstown and I had to play a character I’ve never had to play before.

She was Thai lady and Jane took me through the rehearsals  and she has an incredible gift for finding the truth of the moment. She’ll work and work and work until she knows she’s got the truth out of you. Which is a real luxury as an actor but is quite confronting as you can’t pretend at all.

You also just did a one-woman show down in New Zealand. What was that about?

I wrote the piece with a good friend of mine and it’s something I’ve wanted to express for a long time. It deals with the idea of identity and how complex that is in modern big cities. I’m born and bred New Zealander, it’s the only culture I really relate to, but obviously of Asian descent.

So there’s this weird group of people who don’t expect me to be a New Zealander and I always get qualified by things like ‘Asian New Zealander actress’. Why do I need to identify myself, the Asian part is just in my blood? New Zealand in particular is a big cultural melting pot, so we’ve adopted lots of different cultures.

Like, for example, everyone eats sushi for lunch, but it’s different if you’re Japanese and do it. So it’s all about how identity kind of isn’t really an identifier any more.

You were also a dancer at a young age. So with this creative background, what made you study chemistry?

I think I’m just a naturally super curious person. I really like learning, which makes me sound like a geek. I stayed in school and went to university while I was filming projects just because I wanted to.

Chemistry fascinates me because you’re learning about your world in such a microscopic manner, it really blew my mind. I loved sitting in lectures, having my mind blown apart and then having to piece it back together.

I haven’t really used it, I haven’t played a scientist yet but I suppose it might have given me an edge with technical language.

So, what’s next for you then?

Well, I’m currently filming a short film in New Zealand. It’s all a little bit hush hush, I can’t talk too much about it. But I flew back to here for it just because the character was exciting. Apart from that, I’m in Los Angeles mostly because it’s pilot season, so I’m auditioning for a whole bunch of new shows.

Underemployed starts this Wednesday at 9pm on MTV 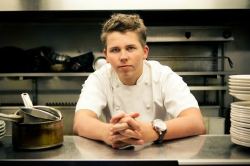