Long regarded as one of WWE’s premier events, the prestigious Royal Rumble comes live from US Airways Centre in Phoenix this Sunday, with Dwayne 'The Rock' Johnson competing in his first World Title match in more than a decade when he challenges WWE Champion CM Punk, the longest-reigning WWE Title holder of the past quarter-century.

To celebrate, Female First have teamed up with WWE to offer 3 lucky readers the chance to win some awesome Royal Rumble and WWE merchandise.

For the 26th year running Royal Rumble will host a series of show stopping bouts including the 30-Superstar Royal Rumble match - a test of endurance, athleticism and survival at all cost, with its winner earning a World Title Match at WrestleMania 29.

What can viewers expect this year? Will The Rock defeat long-reigning WWE Champion CM Punk? Will Alberto Del Rio hold on to his WWE World Heavyweight Champion title against Big Show in a last man standing bout? Tune in to find out!

For your chance to win this awesome WWE merchandise pack, simply answer the below question:

Who is the longest-reigning WWE Title holder of the past 25 years?

tagged in The Rock WWE 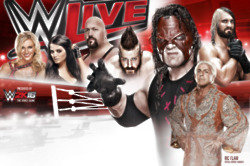