Land Rover and Born Free collaborated together for the Pride of Cape Town - a major public arts event that will see a colourful pride of fifty life-sized, 30kg lion sculptures located in South Africa's popular V & A Waterfront.

The pride of creative lions will be released to 'prowl' the streets of Cape Town in March 2013, followed by an auction in May of the same year, with the proceeds supporting the international wildlife charity. 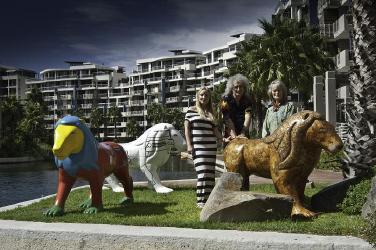 Queen’s lead guitarist Brian May said; “We’ve had the honour to be part of an amazing initiative called the ‘Pride of Cape Town’ here in South Africa, in aid of the Born Free Foundation. You can help too – via the People’s Lion - you can sponsor this special lion with as little or as much as you’d like and you can donate directly at www.bornfree.org.uk”

“In return, your name will be painted on the People’s Lion and along with the rest of the pride, the People’s Lion will be auctioned off in May 2013 in Cape Town, to raise vital funds for helping to save African wildlife. It could well be the most expensive lion ever!”

“Special thanks to Land Rover for supporting the launch event with a mixture of Range Rover, Defender and Discovery vehicles in Cape Town.”

Mark Cameron, Land Rover Global Brand Extension Director said; "We are proud to be working with our Global Partner Born Free Foundation and supporting of the launch of The Pride of Cape Town, in South Africa.

The relationship with the charity is a historical one – stretching back to the 1966 film when Land Rovers were used in the original and classic ‘Born Free’. In the present day, we support a wide range of Born Free projects stretching from Kenya to Ethiopia, Sri Lanka to South Africa, as well as within the UK, where both organisations are headquartered. The renowned capability of Land Rover vehicles is an important enabler to the fantastic wildlife conservation work undertaken by the Born Free Foundation.”

“I sincerely hope that the Pride of Cape Town will not only highlight Born Free’s international conservation efforts, but provide a special focus on the plight of lion numbers which have dramatically dropped due to persecution, loss of habitat and unsustainable trophy-hunting.”

“Their position has never been more perilous and there may be as few as 25,000 left across the entire continent and it’s crucial that we act now before it’s too late.”