What are you doing this Breast Cancer Awareness month?

In addition 60 per cent of breast cancer deaths are in developing countries.  It’s no coincidence that access to diagnosis and treatment is practically non-existent in these areas.

As Breast Cancer Awareness month begins, new international charity The Odysseus Foundation says just £16 will give a woman in need vital breast and cervical cancer screening overseas.  It has launched its ‘Penelope’ campaign to reduce these shocking mortality rates and the associated suffering of the affected women, their families and communities, by ensuring earlier stage detection through effective screening programmes.

Justen Schafer Humes, Founder/CEO of The Odysseus Foundation, and cancer survivor, says: “Nothing can prepare you for hearing the words “You have cancer.”  In 2006, I was diagnosed with cancer.  But I was lucky — my cancer was diagnosed early, and in the UK.

“With advances in treatments, ‘Diagnosis:Cancer’ is no longer a death sentence.  We believe free preventative healthcare is a basic human right, but it’s not something we can do without the support of the UK public, through the ‘Penelope’ campaign.”

The charity wants the UK public to consider the importance of knowing the ‘Bits and Boobs’ in their life while providing breast and cervical cancer screening for a less fortunate woman overseas.

For each £16 donation, The Odysseus Foundation will provide a complete breast and cervical cancer exam to a woman in a developing country or socially-excluded community, including  pap smear, pelvic examination, clinical breast exam and mammogram, and the teaching of breast self-examination (BSE) advocating future empowerment.

The Odysseus Foundation is the first UK charity to address the prevention and detection of breast and cervical cancer overseas.  It aims to raise £1.6 million through its four-year ‘Penelope’ campaign, named after Odysseus’s wife, to provide screening services to 100,000 women, and raise UK awareness of the necessity for regular self-examination and utilisation of free screening services. 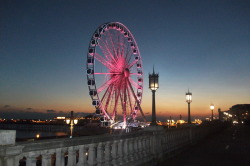